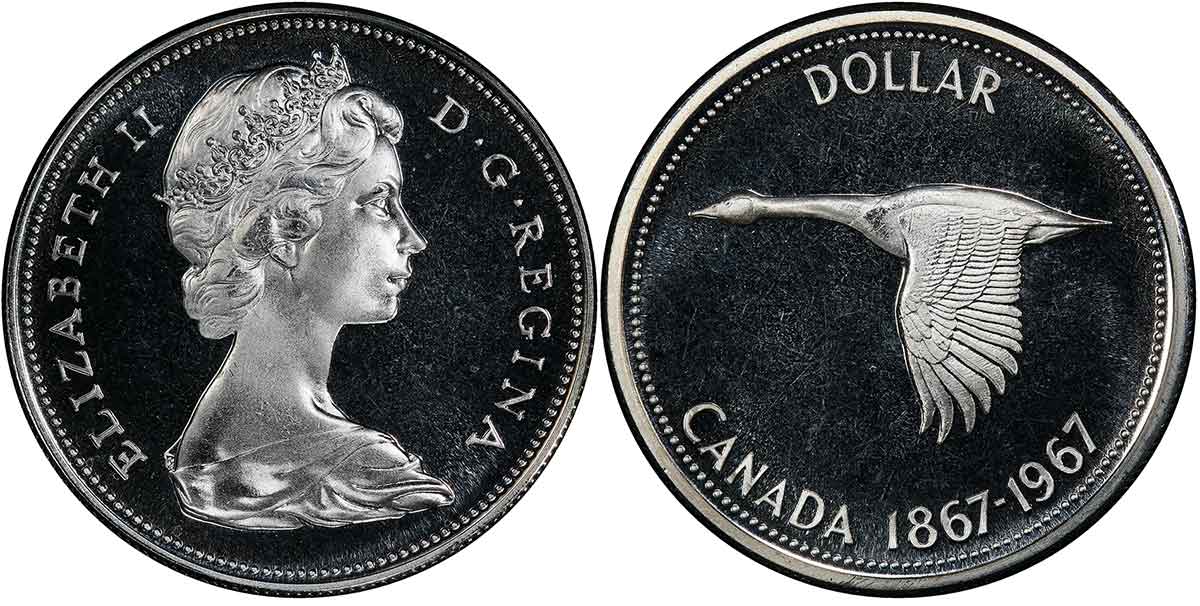 The coins of Canada attract collectors from all around the world with their beautiful, nature-themed designs and motifs of British royalty spanning back to the long and colorful reign of Queen Victoria. Of all the coins struck for Canada since its provincial days in the late 1850s, among the most widely collected are the nation’s silver dollars produced from 1935 through 1967.

These 80% silver coins are favorites among both collectors and precious metals investors and have a wide crossover market, including a particularly large following of United States collectors who admire these large, hefty silver coins as an attractive alternative to U.S. silver dollars. The legal provisions for striking Canadian silver dollars were part of The Dominion of Canada Currency Act of 1910. And while two 1911-dated specimen patterns are known, Canada did not have its first circulating silver dollars until the Silver Jubilee of King George V in 1935.

Over the next three decades came a variety of silver dollars, some changing due to the ascension of younger members of the Royal family to the throne in Great Britain, others because of the implementation of special commemorative designs, and others still thanks to minor tweaks in the various designs. There are even several significant key and semi-key dates among the Canadian silver dollars of the period, providing even more allure for the collector who is looking for a fun, exciting, challenging set of coins to build.

When the first mass-produced Canadian silver dollar rolled off the presses in 1935, it represented a divergence from the norm for Canada’s coins to that point. For most of its history, Canadian coinage was fairly rudimentary in design – the obverse always portrayed the reigning British king or queen of the day, the reverse a standard layout with the country of origin and denomination noted in plain letters under the depiction of a small crown and within a leafy wreath encompassing the periphery near the rim – along with the coin’s date. But this changed in 1935, when the King George V Silver Jubilee Dollar, celebrating the titular king’s 25th anniversary on the throne, was struck with a revolutionary design – at least by Canadian coin standards.

The obverse shows King George V donning his Imperial State Crown and special coronation robe; it’s an ostentatious portrait of the king to mark a most auspicious occasion, to be sure. But perhaps of greater numismatic significance for the Silver Jubilee Commemorative Dollar is its reverse. Hardly echoing anything from the nation’s numismatic past, the 1935 Silver Jubilee Commemorative Dollar features a fur company boatman (more commonly known as a voyageur) with a Native American traveling together in a canoe under the Northern Lights, a stand of evergreens in the background.

This exquisite landscape ushered in a slew of other ornate designs to come on other Canadian coins beginning in 1937. Meanwhile, the reverse of the 1935 Silver Jubilee Commemorative Dollar became known as the “Voyageur” reverse, a staple for the Canadian Dollar on regular issues beginning in 1936 and lasting until 1986 – with the exceptions, that is, of various other commemorative reverse designs over the intervening decades.

Other commemorative designs for the silver dollars include those honoring the 1939 Royal Visit, the admission of the province of Newfoundland in 1949, the centennial of British Columbia in 1958, the centennial of the Confederation meetings in 1964, and the centennial of the Confederation of Canada in 1967. Meanwhile, the obverse changed several times between 1935 and 1967. The first such change came in 1937 with the arrival of King George VI. After his death in 1952, the appearance of his daughter Elizabeth as Queen Elizabeth II commenced on Canadian coinage in 1953.

The queen’s portrait has changed multiple times since her coronation as she has aged to become the longest-reigning British monarch. The first of these changes to reflect the maturing queen came in 1965, when Canadian coinage bore the second portrait of Queen Elizabeth near the age of 40 – this time wearing a tiara and appearing gracefully older than her mid-20s likeness on the first of her coinage.

Every great series has a key date, and the run of Canadian silver dollars from 1935 through 1967 is no exception. In fact, counting all scarcer issues, including major varieties, there are at least half a dozen widely collected Canadian dollars that will keep even the more financially well-heeled collectors on their toes.

The first of these is the 1948 King George VI Dollar, which saw a mintage of only 18,780 pieces and is the all-around rarest regular-issue Canadian silver dollar. PCGS-graded examples in the AU55 range have sold at auction for around $1,250 in recent years. Other scarce regular-issue dates include the 1945 and 1947 King George VI Dollars, with mintages of 38,391 and 21,135, respectively. Nice AU examples of the 1945 in PCGS holders trade for around $250, while similarly graded specimens of the 1948 can be had for about $175. Most of the other dates can set collectors back anywhere from $25 to $75 in the high-end circulated or lower uncirculated grades.

The Canadian silver dollars of 1935 through 1967 also involve many varieties, often arising from slight modifications to the appearance of water lines or shaping of date numerals on the reverse. These numerous varieties are of most importance to the most ardent series specialists and are not usually pursued by the more casual collector of Canadian silver dollars.

However, one of the most important varieties among these dollars encompasses two types of variations on the obverse of the 1953 Queen Elizabeth II Dollars. The earlier of these is the so-called No Shoulder Fold obverse, which lacks two light lines over the young queen’s shoulder to indicate her gown – an omission caused not by design but rather strike happenstance, as the relatively high-relief profile on the earlier 1953 Queen Elizabeth II Dollars prohibited the design from fully articulating. The latter Shoulder Fold version shows more prominent lines – a feature that can be easily worn off in circulation but numismatically attributed by the presence of other details on the coin.

Assembling a nice collection of Canadian silver dollars can be a pleasing challenge – not one without some significant financial expenditure but neither one that is cost prohibitive for many collectors. There are presently about a dozen different PCGS Registry Sets exclusively dedicated to the Canadian silver dollars of 1935 through 1967, with the later, largely base-metal Canadian Dollar coinage struck from 1968 on constituting many others. A collector may opt for a basic circulation set, others involving the specimen and proof strikes, yet others that incorporate the prooflike strikes, and/or Registry Sets inclusive of the many varieties. These coins are even represented by a lowball grade Registry Set! In other words, there is no shortage of collecting options for those who wish to build a beautiful set of Canadian silver dollars.

While many Registry Set collectors will lay out big bucks for top-condition coinage, one need not pay tens of thousands of dollars or more to build an attractive set. Circulated and lower-grade Mint State Canadian silver dollars can be absolutely stunning coins in their own right, in large part owing to the extravagant designs on the regular-issue and commemorative coinage. A date-set collector can’t avoid the pricier key and semi-key dates, but the majority of a complete, year-by-year circulation set can be built mainly with the affordable common dates, the more-expensive rarities perhaps being added in when and how the budget permits.

Whether a jet-setting collector of world coinage or a longtime United States numismatist who desires something different, one will surely find a fun adventure in the pursuit of the Canadian silver dollar. A multifaceted series with myriad areas in which to specialize, these beloved silver coins offer a bounty of exciting avenues for collectors in the Great White North and well beyond.