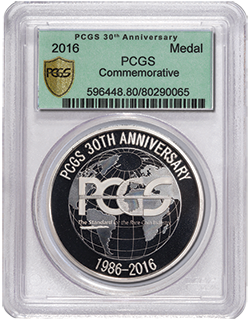 The medals, adorned with the PCGS logo on top of a metallic globe, read the words “PCGS 30th Anniversary” on the top of the obverse, with the company’s history, 1986-2016, marked by dates on the bottom.

The reverse of the medals list the company’s four locations around the world—Newport Beach, Paris, Shanghai and Hong Kong—flanking a metallic globe adorned with a colorized PCGS shield. Each medal is housed in a PCGS holder with a 30th anniversary “Old Green Holder” label.

“This will be the first opportunity for collectors and dealers in Europe to receive the 30th anniversary commemorative medal. We launched the medal at the Hong Kong International Coin Convention and Antique Watch Fair in April, and it was a hit,” said Mr. Don Willis, PCGS President.

Any collector or dealer who submits 50 or more coins for onsite grading during the June Paris Grading Week will receive the commemorative medal for free. There is a limit of one medal per customer, while supplies last. The cutoff date for onsite coin submissions is June 15.

In addition to the commemorative medals, collectors can still get the 30th anniversary “Old Green Holder” labels.  PCGS launched its authentication and grading service in 1986 with what is now referred to as the "Old Green Holder" or simply, "OGH".

“These attractive throwback labels quickly became popular when first introduced in February in the United States. They will be available for submissions of vintage and modern coins for either Standard Service or Secure Service with the distinctive PCGS Secure gold shield on the label,” explained Mr. Willis.

The cost is 7€ per coin, in addition to the authentication and grading fee. Coins submitted for the anniversary insert label must be submitted separately from submissions for regular labels.

Since its founding in 1986, Professional Coin Grading Service has become the industry standard in third-party certification. With offices in California, Paris, Shanghai and Hong Kong, PCGS experts have certified over 32 million coins with a total market value of over US$30 billion.

For additional information about PCGS and its services in Europe, visit www.PCGSeurope.com, email [email protected], or call the PCGS Paris Submission Center at +33 (0) 1 40 20 09 94.