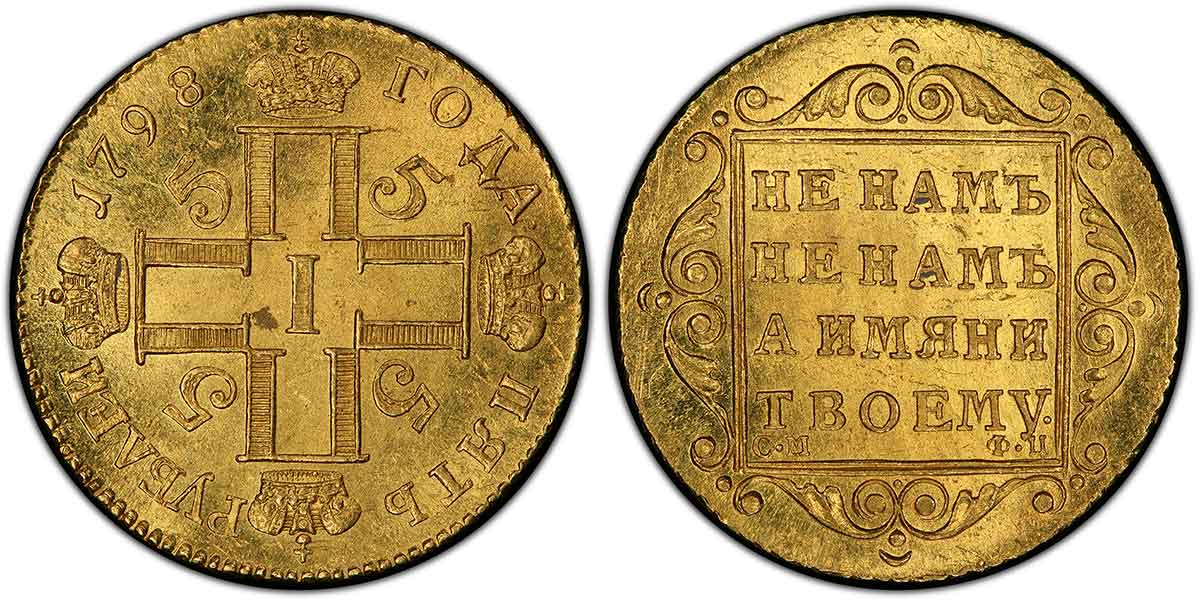 For Russian numismatics there are many great rarities and highly desirable coins. Recently one such piece was submitted to PCGS for certification that stands out as exceptional. This fantastic specimen fits the criteria for a great coin, including its condition, rarity, desirability, and pedigree. The coin made under Paul I (1796-1801) is a gold 5 Roubles dated 1798. Struck at the St. Petersburg Mint under initials ФЦ for Fedor Cetreus, the coin is a desirable piece of Russian numismatic history, as any gold coin issued under Paul I. Yet the condition and pedigree go even further in making this piece special.

Among his numismatic works is Catalogue of Imperial Russian Coins 1725-1891, which was reprinted in the United States in 1976. He also served as director of the Alexander III Museum in 1895, in which he used his position to build the museum’s collection of coins, including selections from the Emeryk Hutten-Czapski cabinet. George Mikhailovich had his own collection crated and stored at the State Loan Bank in St. Petersburg for safekeeping with the issues of World War I. During the Russian Revolution, four of the five crates were smuggled out of the country. Eventually over 10,000 of his Russian coins and over 1,250 of his medals were given to the Smithsonian Institution for the National Numismatic Collection in Washington, D.C. However, some of his collection was sold, including this 1798 5 Roubles in the Grand Duke George Mikhailovich Collection Sale in Hess Luzern on October 25, 1939, where this coin was Lot 332.

This coin would again come to market in the Moreira collection sold by Superior Galleries in “The Moreira Collection Sale, Part 2” sold in Beverly Hills, December 10-11, 1988 as Lot 1259. The coin was sold again in The New York Sale XXXIII in January 2014 as Lot 1154, where it took $170,000 with an early estimate of $35,000. In September 2018, the coin was auctioned again in Auction House “Alexander” Sale #40 as Lot 60 where it brought $160,000. In 2020, the coin was submitted to the PCGS Europe office in Paris recognized as not only authentic but also as the Mikhailovich-Moreira coin and graded MS64 by PCGS.

“Over the last several years PCGS has been working actively in offering the best services for Russian and European coin certification,” said Sergey Bonar, Manager of PCGS Europe. “We have added many varieties and reference numbers from Bitkin to Fedorin to give costumers the best possible service by PCGS for referencing their coins and to offer the world’s best protection and guarantee, and we have seen a significant increase in submissions and market confidence from this.”

Professional Coin Grading Service (PCGS) is the premier third-party coin and banknote grading company that was launched in 1986. Over nearly 35 years, PCGS has examined and certified some 43.7 million U.S. and world coins, medals, and tokens with a combined value of more than $38.5 billion. For more information about PCGS products and services, including how to submit your coins for authentication and grading, please visit www.PCGS.com or call PCGS Customer Service at (800) 447-8848.

Previous Israel Coin Dating with the Hebrew Calendar Next The Banknotes of North America: Aruba