There are many fantastic coins and rarities in the British series, however large coins such as crowns and five-pound pieces are favorites for many collectors. For the year 1831, no crown or five-pound coins were issued for circulation. Yet the Royal Mint did indeed produce such pieces, but only as pattern issues. Royal Mint officials employed the silver crown die for production of the gold five-pound pattern, meaning both types carry identical designs though are of different weights. However, the gold pattern is many times rarer than the silver. PCGS recently had the honor grading one of the extremely rare gold pieces with a fantastic pedigree. 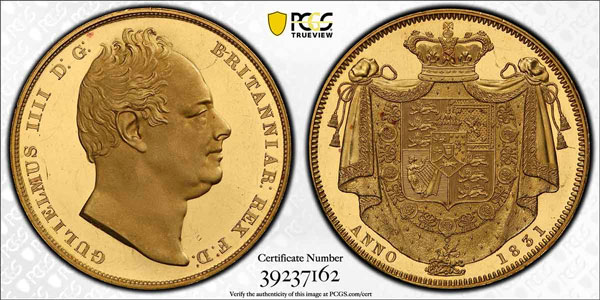 Submitted at the Long Beach Coin, Stamp, Currency & Sports Expo for grading to PCGS was an example of the 1831 gold five-pound pattern coin. This coin is listed in many references, including W&R-270 where this exact coin was cited, ESC-272, KM-Pn99, Montagu-1086. This piece is even more special in that it is pedigreed back to 1887 when it sold from the A. E. Copp Collection privately to the outstanding John Gloag Murdoch Collection. It was sold again in 1904 by Sotheby, Wilkinson, & Hodge in the third segment of the sale of the J. G. Murdoch collection. The coin saw the auction block again in 1978 when it was in a Schweizerischer Bankverein Auction. The last sale occurred in January 2020 from Classical Numismatic Group (CNG) in the Triton XXIII Auction as part of the G.W.K. Roberts Collection as Lot 1346, where it brought $425,000 plus buyer’s fees.

The coin, while submitted raw to PCGS, had previously been in another holder. The graders at PCGS unanimously graded the specimen Proof-63 Deep Cameo. It is unknown the next time the coin will surface again and the pedigrees that it will add, but it will be protected for the future in its PCGS holder and is now fully guaranteed.

Only the best coins end up in PCGS holders. Learn more on how to submit your coins under the PCGS Crossover Service and submit today.