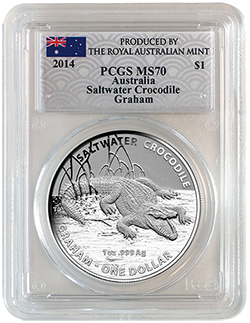 Similar to the trend in the United States coin market, the demand for modern coins continues to grow in Europe.  The number of modern coins submitted by collectors and dealers to Professional Coin Grading Service (http://www.PCGSEurope.com) is also growing.

"The expansion of the grading market has reached a global stage, and more people are demanding certification for the coins they buy and sell.  The expansion of modern coin production by mints around the world and the desire by collectors for world modern coins are at all-time highs," said PCGS President Don Willis.

Renowned for their calm temperament, agility, strength and endurance, the Australian Stock Horses evolved from colonial horses that arrived in Australia with the historic First Fleet in 1788 that sailed from England.

Bindi, a crocodile who is a popular attraction at the Australia Zoo in Beerwah, Queensland and who was named after the daughter of the late "Crocodile Hunter" Steve Irwin, is featured on the 2013 Saltwater Crocodile coins.  The 2014 coins in the series depict Graham, Bindi’s mating partner. 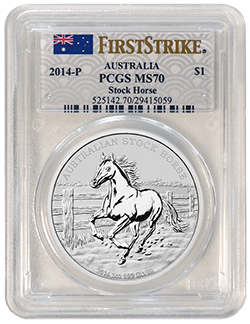 "Modern Australian coins are enjoying increasing popularity in Europe, and having them certified now by PCGS is the beginning of a perfect partnership," said Michael Kuffner, EMK International Sales Director.

"PCGS is especially proud to have worked with EMK and the Perth Mint on grading First Strike 2014 Stock Horse silver bullion coins and add to the continuing success of this series that was launched last year," said Muriel Eymery, PCGS Vice President of International Business Development.

"More European collectors and dealers are realizing the value of PCGS certification when they buy or sell coins.  PCGS offers competitive pricing for the authentication, grading and certification of modern coins, whether submitted one-at-a-time or in bulk quantity," explained Ms. Eymery.

Coins can be submitted to the PCGS Paris Submission Center by mail or in person if you are a PCGS Authorized Dealer or a PCGS Collectors Club member.  An easy to use submission form is available online at http://www.pcgseurope.com/Submit?l=en.